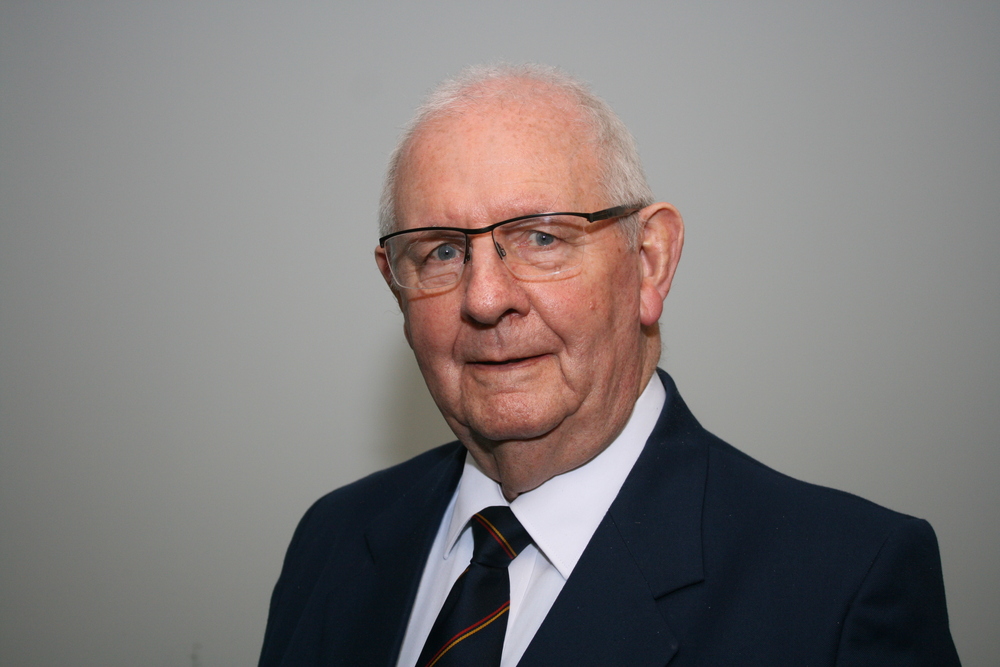 It was with great sadness that we received the news that Choir Vice President and long-term member of the Second Tenor section, Roy Pugh has passed away. Roy had been bravely fighting cancer for some time and it was on his 89th birthday that the battle was finally lost.

As well as his singing contribution Roy was the Choir’s current Archivist and Annalist and his contribution over many years saw him cover a significant number of other administrative roles in the Choir. All this contributing to the awarding of the Choir’s highest accolade, a Vice Presidency, to him in 2014.

He joined the Morriston Orpheus in 1974 having been posted, as a serving police officer, to Neath from his native Rhondda Fawr a few years earlier.  In 1978, he became a Choir Registrar, and this was followed in 1981 with his election as the Choir’s General Secretary, a post he initially held for 20 years. During that period the General Secretary’s duties included a broad range of responsibilities some now undertaken by other designated officers.

Roy has organised tours to West Berlin (3 times), France (2 times) North America (2 times) Spain and Eire.  He also made the domestic arrangements for the Choir’s participation in special events such as the Royal Fireworks at Hyde Park, the Pope’s visit to Wales and the appearance with the “Alarm” on the Terry Wogan Show in Hammersmith. In addition, he organised the Choir celebration dinner/dances for the 1985 Golden Jubilee and the 1995 and 2010 Anniversary celebrations. Up until her untimely death in 2007, Roy’s wife Olive was his inseparable partner in all aspects of his life, and this was especially true of her contribution to the Choir. In many respects she was his co secretary.

When previously asked, what were the highlights of his time in the Choir, Roy had particular memories of his first tour of North America in 1975, when, on his first ever flight, the plane was diverted to Newark because of ‘an incident’!  He held fond memories from all the tours, of the prestigious venues the Choir has sang in throughout the world, of sharing the stage with world famous artistes, of Royal events, recording at the famous Abbey Road studios and his involvement with the MOCSA Young Welsh Singer of the Year Competition.

The latter formed part of a wider and significant contribution Roy made to the Choir’s Supporters’ Association and which he continued to make right up to his most recent illness. His contribution to MOCSA has previously been recognised with the Association making him a Vice President.

The Choir extends its heartfelt sympathy to Roy’s family at this sad time and details of the funeral arrangements will be added here when confirmed.  See funeral information below:

The Morriston Orpheus Choir has lost a very special individual whose contribution on and off the concert stage will live long in the memory.

Thank you Roy:  Rest in Peace.

Roy's family has provided the following details about the funeral:

Please note that whilst all are welcome to attend the Crematorium unfortunately, due to COVID restrictions, only 50 invited people are allowed to attend the service.

If you are unable to attend the funeral service, the service will be available to view online using the following details. https://www.wesleymedia.co.uk/webcast-view
Webcast Login PIN 686-8484