Singing in Your Slippers !

When the Morriston Orpheus Choir reluctantly took the decision, in March of last year, to suspend its in-person rehearsals, little did anyone realise that some 10 months later, the ongoing pandemic would still be preventing the Choir from getting together in person.

Thankfully it has managed to embrace technology and, encouraged by its youngest chorister Aaron Brown and with the support of Swansea University, the Choir took the bold step of holding its twice weekly rehearsals on-line. Although there is something to be said about popping to rehearsals in your slippers, all recognise that the twice weekly 'Zoom' sessions can never fully match the regular gatherings in the Choir's rehearsal room at the University's Bay Campus.

What it has meant however is that the Choir has been able to 'meet' on a regular basis throughout these difficult times and even managed to produce some 'remote' recordings to share with its loyal followers: Click here to check earlier news items about the recordings. 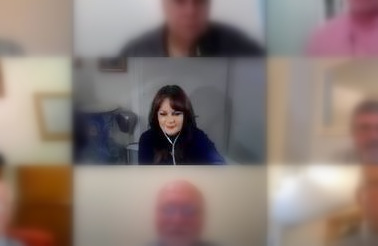 There have been plenty of challenges along the way not least for the Choir's  Musical Director, Joy Amman Davies, who leads each rehearsal from her Cardiff home. Making sure that the appropriate musical accompaniment is produced and then all loaded into her computer system before each rehearsal takes some doing and then it's a case of making sure it's all played, either live on the piano or through the computer, at the appropriate time as each section of the Choir is put through its paces.  Joy probably didn't expect to have to become an IT technician as part of her role as MD!

Her success in meeting the challenge together with the technical and other support received from choristers quickly saw the number of participants attending the on line rehearsals grow and its most recent rehearsal, despite the continued disruption to everyone's daily lives, saw some 60 choristers in attendance, (some of whom are pictured below) with a number of absent 'regulars' soon to return and swell that number even more.

The Choir has been delighted to also welcome some new recruits recently. If you want to know more about joining the Orpheus family just get in touch - click here for details.

At the moment the future remains uncertain, but with the mass vaccination programme well underway we all remain hopeful that the time when choristers once again have to take off their slippers to go to rehearsal is not too far away!

Click here to receive our Newsletter
Our Newsletter is sent by email and provides news of the Choir's activities.
D J Thomas coach hire and holidays