Originally released in 1976. Many of the tracks were re-issued in 1989 in a compilation CD. In 2009 the whole LP was remastered and re-issued.

Buy from our on-line shop

On the Choir’s return from a busy concert tour to the USA and Canada in September 1975, a full schedule of rehearsals was immediately undertaken to learn 40 new songs and arrangements. The pressure was intense - everything was to be learnt by heart in just over six weeks! Lieut. Col. Paul Neville, Principal Musical Director of the Band of H.M. Royal Marines School of Music, travelled to the rehearsal room – the Ivor E. Sims Memorial Hall in the heart of Morriston - to listen to the Choir in its preparations, to establish tempos, dynamics and generally get the feel of the style of singing ready for the recording. I recall that he was particularly delighted with the Caribbean Sunshine medley, which was then in rehearsal. Sharing the three-times a week rehearsal duties for the LP was Choir accompanist Doreen Williams.

The recording sessions at EMI’s Abbey Road (London) studios went without a hitch, the freshness and passion of the singing combined with the brilliance and verve of the Band’s playing resulted in an album that has remained in demand since its first release. Ray Woodfield’s medleys skilfully contrast vigorous and upbeat numbers with more intimate and soulful songs to create a completely satisfying artistic whole.

The songs on this CD take us on a musical tour. Firstly to the USA with Rodgers and Hammerstein Showstoppers and The US Marine Corps Hymn(This was included to mark the bi-centenary of the USA in 1976); then on to experience Caribbean Sunshine; a trip down memory lane with Musical Comedy Memoriesof songs from the old and great Hollywood musicals. Songs of the First World War and Songs of the Second World War bring us back to Europe for some of the most poignant and yet optimistic songs written in wartime. I Believe is a hopeful and heartfelt religious song that fits in well with the great hymn-singing tradition of the Welsh male choir.

Back in 1976 when the songs were first released, this  LP was widely regarded as a ground-breaking for both Choir and Band. The recording has stood the test of time and has become a classic. The driving force behind the original recording was EMI producer Bob Barratt who masterminded very many of the Morriston Orpheus recordings for over 30 years, and without Ray Woodfield’s brilliant orchestrations and vocal arrangements, A Grand Night For Singing would never have happened. This was first of three very fruitful LP collaborations between the Morriston Orpheus Choir and the Band of H.M Royal Marines – the second LP was titled The Very Best of Gilbert and Sullivan and the third LP Say It With Music with Musical Director Dr. Alwyn Humphreys in charge.

In 1989 some songs from A Grand Night and from the Gilbert Sullivan LPs were issued on CD, but now the whole of the original LP A Grand Night For Singing has been remastered and refreshed for the 2009 CD.

The official photo for the LP record sleeve - taken outside the Guildhall, Swansea. In the middle front are Leslie Ryan with Doreen Williams, accompanist. 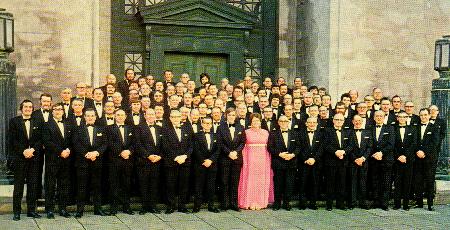 1. Rodgers & Hammerstein Show-Stoppers: It's  Grand Night for Singing, Bloody Mary is the girl I love, There is nothin' like a dame, Younger than springtime, You'll never walk alone, Edelweiss, Geting to know you, Oklahoma, Oh what a beautiful mornin'.

4. Songs of the First World War: Oh! It's a lovely war, It's a long way to Tipperary, There's a long, long trail, Keep the home fires burning, Mademoisell from Armentiers, Over there! Roses of Picardy, Pack up your troubles in your old kit bag.

5. Songs of the Second World War: The army, the navy and the air force,  Bless 'em all, Kiss me goodnight sergeant-major, Lili Marlene, I'll be seeing you, Now is the hour, This is the army Mister Jones, The washing on the Siegfried Line.

The Choir in 1977 outside the Ivor E Sims Memorial Hall