ANDREW, JO AND ORPHEUS HELP SAVE ALL SAINTS

Andrew Rees, Jo Appleby and Swansea’s Morriston Orpheus Choir will be singing to help save a millennium’s worth of history at a concert in the city next week. The Choir will be performing at the historic All Saints Church, Oystermouth, on Saturday 11th August, and all proceeds from the concert will go to the restoration appeal for the church.

Much of the All Saints Church building dates back to the 11th and 12th centuries, with some restoration taking place in Victorian times.

Andrew Rees hails from Carmarthen. He studied at the Royal Northern College of Music, Manchester, and completed his studies on the Opera Course at the Guildhall School of Music and Drama, London in 2001.

He was invited to join the Jerwood Young Singers Programme at English National Opera direct from college and between 2004 and 2006 became a full company principal. During his time at ENO, Andrew appeared in the British Premiere of Poul Ruders’ The Handmaids Tale singing the role of Luke. Other operas performed in at ENO include War and Peace, Khovanshchina, La Traviata, Tosca, Billy Budd, Salome, La Vestale, The Rhinegold and Falstaff. Andrew has worked under directors such as Francesca Zambello, David McVicar, Phyllida Lloyd, Tim Alberry, Jonathan Miller, and Keith Warner. Conductors include Mark Wigglesworth, Elgar Howarth, Oleg Caetani, Kwame Ryan, Andrew Litton and Paul Daniel.  Roles elsewhere include Alfredo La Traviata (Mid-Wales Opera) The Lawyer Punch and Judy (Porto) and Pinkerton (Otago Festival), New Zealand. Andrew created the role of Ryan in Jonathan Dove’s opera for Channel 4 television When She Died: Death of a Princess. In 2003 he made a highly successful debut with NDR Sinfonieorchester Hamburg under Stefan Asbury, singing Walter/Hugo/Old Woman in Judith Weir’s Blond Eckbert. In 2004 he made his Swiss debut singing Boris in Janacek’s Katya Kabanova at the Stadttheater St.Gallen under Jiri Kout and recently returned to perform Sergei in Shostakovich’s Lady Macbeth of Mtsensk also under Kout. Andrew made his German operatic debut singing the same role in Weimar in July.

After replacing Ben Heppner in Helsinki to sing Elgar’s The Dream of Gerontius with the Finnish Radio Symphony Orchestra and the CBSC under Oramo, Andrew was invited to perform Cavaradossi Tosca and the Fisherman in Stravinsky’s Le Rossignol, both under Oramo.

Jo Appleby hails from Thornton, Lancashire. At the age of nineteen she began her studies at the Royal Northern College of Music graduating with honours four years later. Joanne then gained a scholarship from the D’Oyly Carte opera company for further postgraduate studies at the RNCM. 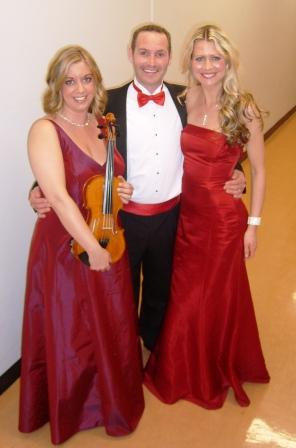 Jo spent four years with the Glyndebourne Festival and Touring Chorus where she understudied the role of Jano in “Jenufa”. During this time she performed in many recitals, oratorio and master classes. She has also sung with Carl Rosa opera, Diva Opera, London voices and for Raymond Gubbay productions. In 2002 Jo was signed by Sony BMG as an original member of the opera band “Amici Forever”. With Amici she has sung to huge audiences worldwide in prestigious venues including the Sydney Opera House, Windsor Castle (for HRH The Prince of Wales), The Queen Elizabeth Hall, The Royal Albert Hall, (for the Queen and Prince Philip), Wembley Stadium, Cardiff Millennium Stadium, the state Opera House in Kiev and on board the QE2. Amici have toured extensively promoting their multi platinum selling albums “Defined” and “The Opera Band”. They have performed live on radio and television in the UK, Australia, New Zealand, Japan, Europe and the USA. Jo also features on the debut album of Sony BMG artist Joseph Mc Manners. Since her departure from Amici Jo has toured Australia, Dubai and New Zealand as a soloist with The Morriston Orpheus Choir and has just returned from a “classical” cruise with Classic fm’s John Brunning. She was soloist for the May Cathcart Spring Prom concert at the Royal Albert Hall with the RPO and sang again with the RPO at Rochester castle last month.

Jo is a proud ambassador for the Prince’s trust. She is currently involved in UK concert tour, for Calibre productions.

It's the first chance locally for everyone to hear the choir in concert with their tour soloists: soprano Jo Appleby is joined by tenor Andrew Rees and violinist Sali-Wyn Ryan. Also performing will be the newly appointed Musical Director Joy Amman Davies, new accompanist Jo Scullin with organist, Les Ryan.

Tickets for the evening are £8 and are on sale at the Mumbles Tourist Information Centre, telephone 01792 361302